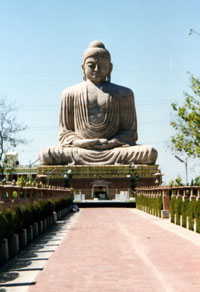 Basic Beliefs of Buddhism. One of the amazing statues to see in Bodhgaya, where The Buddha - The Awakened One - attained enlightenment.

I took this photo during an astonishing journey to India back in the early 1990s. If you wish to explore what it's like on a spiritual pilgrimage with a Nyingma Buddhist Master, then click this link for the story with many pictures and info on the sacred sites of
India, Land of Buddha Shakyamuni

East Meets West: Buddhism is now the fourth largest religion in the world. It has become popular in the West mostly due to the diaspora of the Tibetan people (99% Buddhist) since the invasion of Tibet by communist China in 1959.

Ultimately the most famous Buddhist is His Holiness The 14th Dalai Lama of Tibet who won the Nobel Peace Prize in 1989. To learn about Tibetan Buddhism, click here

Buddhism has at least 375 million followers, and is practiced at every sacred corner of our Earth. It is estimated that China, Japan, Thailand and Vietnam (respectively) have the highest number of people with Buddhist beliefs.

Surprisingly, India has only 7 million Buddhists, whereas the tiny country of Cambodia has a Buddhist population of 9 million.

Buddha wisely gave a variety of teachings because all sentient beings (beings with consciousness, feeling) have different personalities, inclinations and interests. So, in this same way we each understand these teachings according to our level of mind and disposition. Here I offer a very simple explanation:

The Four Noble Truths are essential Buddhist beliefs that Buddha taught when he Turned the Wheel of Dharma. In order to understand Buddhism beliefs and practices, one must learn and then apply these Four Nobles and Eight Fold Path:

The Eight Fold Path has basic beliefs of Buddhism as follows:

These fundamental Buddhist beliefs are very important today as they were 2,500-plus years ago when The Buddha taught aspirants to study and contemplate them. Also, one of the most basic Buddhism beliefs is the practice of meditation, which is the focus of this 360 healing meditation methods web-site.


The essence of The Three Jewels, The Four Noble Truths and The Eight Fold Path is the same in other sects, or branches of Buddhism, such as: Theravada, Pure Land, Zen, Vajrayana, etc.

Remember the core intent for all Buddhist practitioners is to emerge from the miserable cycle of what we call samsara (suffering) by developing immeasurable love, compassion and wisdom, which are basic beliefs of Buddhism.

One of the Basic Beliefs of Buddhism is:
May all beings be happy! 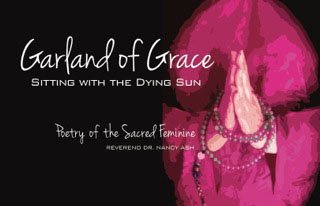 Garland of Grace: Sitting with the Dying Sun

His Eminence, Khenchen Palden Sherab Rinpoche
Stainless, Sacred Upholder of The Red Hat Lineage, The Nyingmapas of Tibetan Buddhism. Dzogchen Master of the Vajrayana, The Indestructible Diamond Vehicle passed into parinirvana in June, 2010. He was my life-mentor and spiritual father, and is sorely missed...


May he return swiftly for the sake of all sentient beings!

experience virtual pilgrimage FREE Prayer Request HOME from basic beliefs of Buddhism
[?]Subscribe To This Site
Copyright 2007 - 2020 and Beyond... All Rights Reserved.
Doinga360.com is the official "Doing a 360" portal created by Rev Dr Nancy Ash Turn your life around - completely - to follow Soul's purpose